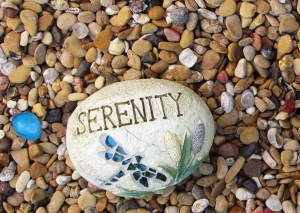 What’s stressing you today? Have the little things of life become big things because you’re having trouble letting go? Is your stepchild relationship experiencing a small leak that’s about to lead to a blowout?

How we react to what happens around us determines a hostile or peaceful outcome. If my stepson shoots a glaring look my way, I can choose to ignore it or I can let it ruin my day. If my stepdaughter challenges my thinking on something I believe in, I can spout off a defensive remark or I can stand firm in my position while shrugging my shoulders.

There are a multitude of things that happen every day in our stepfamily relationships that are not worth getting stressed about. When we identify which battles we want to fight, and leave the rest alone, we find more serentiy for our journey.

My good friend and stepfamily authority, Ron L. Deal, says his whole perspective on life changed after he lost his son from a brief illness. He says he doesn’t stress anymore about a spilled drink in the living room or whether every paper gets put in the recycling bin. Life is simply too short to spend our days bothered over trivial matters.

In his book, Don’t Sweat the Small Stuff… and it’s all small stuff, Dr. Richard Carlson says he plays a game with himself called the “time warp.” He says, “I made it up in response to my consistent, erroneous belief that what I was all worked up about was really important. To play “time warp,” all you have to do is imagine that whatever circumstance you are dealing with isn’t happening right now but a year from now. Then simply ask yourself, ‘Is this situation really as important as I’m making it out to be? Will this matter a year from now?’ Once in a great while it may be — but a vast majority of the time, it simply isn’t.”

So, next time your stepchild leaves his laundry in the washing machine and goes to school, leaving it for you to finish, remind yourself that it won’t matter a year from now. That doesn’t mean you don’t address the issue when he comes in from school and seek to correct it from happening again, but it does mean you choose not to stew over it the rest of the day.

Are you sweating the small stuff in your stepfamily relationships?

Let Go of the Guilt

Stepfamily Trap: The Danger of Denying our Feelings